The crumbling bridge: behind the scenes of the building process 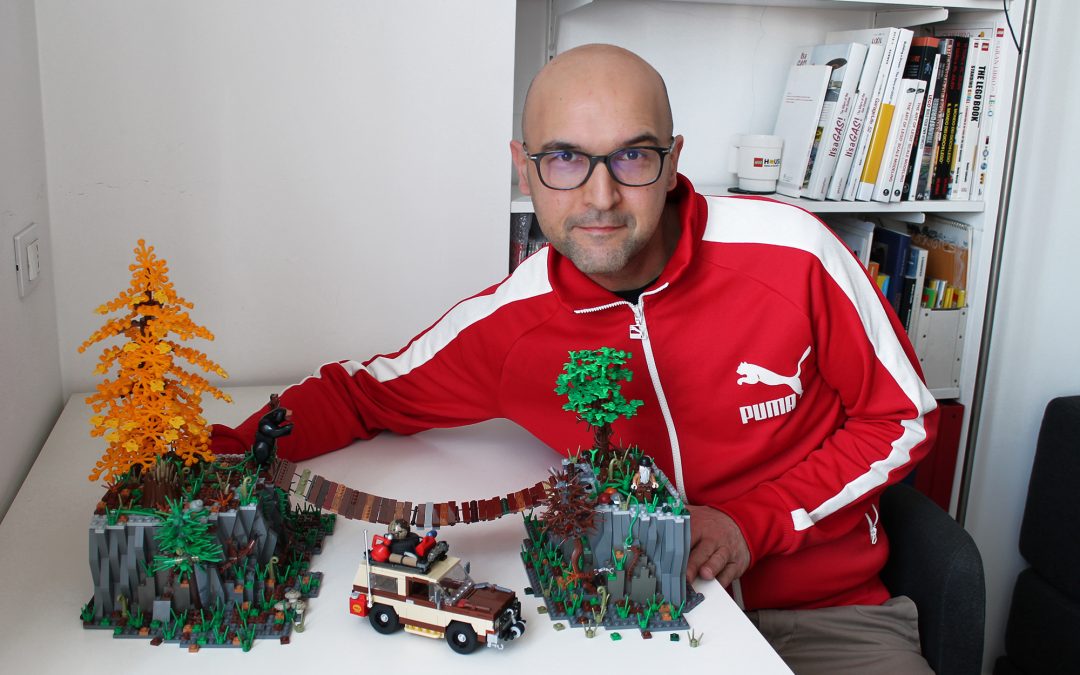 Last November I built a MOC in which two weird guys lived 30 feet in the air in minimal but cozy stilts. It was called Stilt Houses precisely. In the diorama there was also an off-road vehicle for which I wanted to build a small dedicated setting. Recently I came up with the idea of creating an ironic scene with some building techniques that I had never used, such as the rocks made of many dark bluish gray slopes and inverted slopes.
The diorama is quite small but cute, and it manages to get a smile, in this period there is a need…
It is mainly composed of three parts: two rocky blocks covered with shrubs and a crumbling bridge that joins them. In the middle the all-terrain vehicle is crossing the bridge escaping from the hungry bear to take shelter on the stilts.

The starting point of the MOC is the first rocky block, the largest on the left. The block is made with a quite common building technique that I had never used. A couple of years ago I managed to get a lot of dark bluish gray “slopes” and “inverted slopes” thanks to the bulk program. And I finally used them for the rocks of this diorama.
To complete the block I added shrubs and bushes. A bright light orange pine stands out in a mostly brown and gray setting. The leaves are attached to “plates with clip on end” and fixed to “plate with bar frame octagonal”. It is not the first time I have used this technique and the outcome is always amazing. I got the yellow leaves from the pick a brick wall at the local LEGO store in my town. Below there is a small tree made with many “flower stems” and the trunk is a dinosaur tail in dark brown. I also added a “tree hollow stump”, a quite expensive and rare piece from 90s Western theme. I love that piece.
The second block on the right is similar to the first, a little smaller and with a green sapling on the side. I used a bunch of reddish brown “hoses” for the trunk of the tree and some “bars with clips” to hold the leaves. At the base a barrel contains the hoses and all around some whips to create the twisted branches effect. Don’t miss the mushrooms made with knit caps of different colors!
The most characteristic part of the whole diorama is probably the crumbling bridge that joins the two rocky banks. The bridge recall the one I built for the Stilt Houses, but it’s longer and wider. It’s made of two long black parallel “strings with rope climbing grips” to which plates with clips are attached, and above them different tiles and plates of various colors. And it rocks!
Last but not least in the middle of the bridge there is the off-road vehicle, ready to deal with mud and rough terrain and complete with all the necessary tools to fix it yourself in case. It is based on my previous Chevrolet Blazer spotted in the Sheriff Hopper’s Cabin diorama built in 2019 but with a new 80s two-tone paint job and loads of gear strapped all over. It’s full of details and some interesting part usage such the weird “Scala towel bar” used for the running board of the Blazer. And take look also at the front winch and the side mirrors…

Below a few photos of the building stages. From left to right: 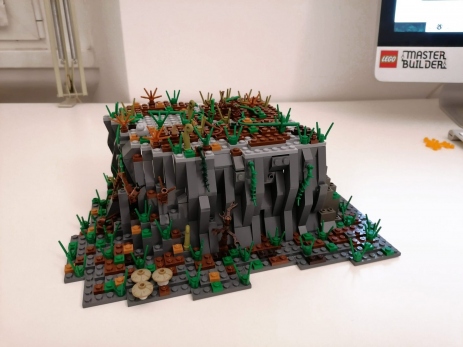 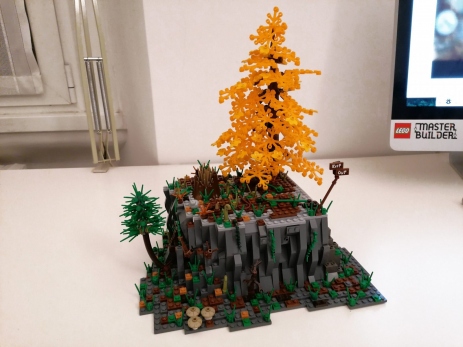 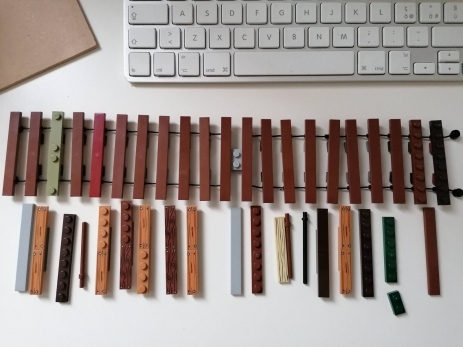 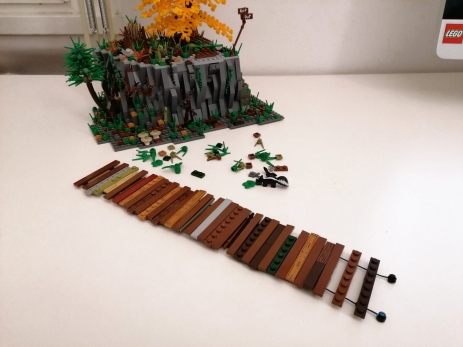 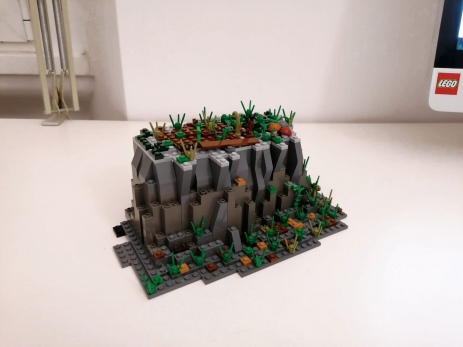 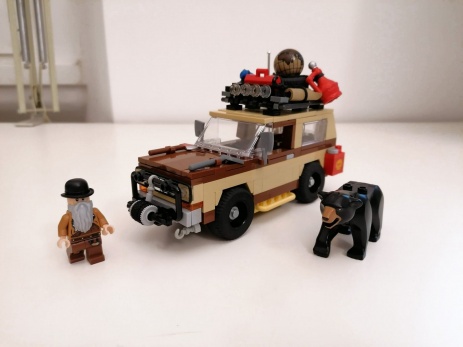 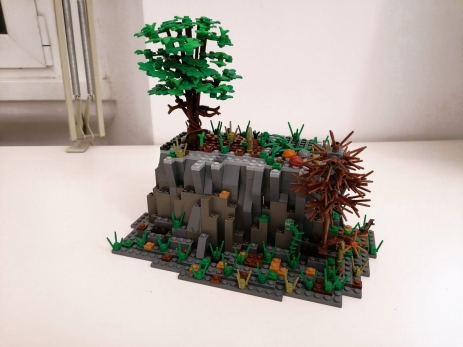 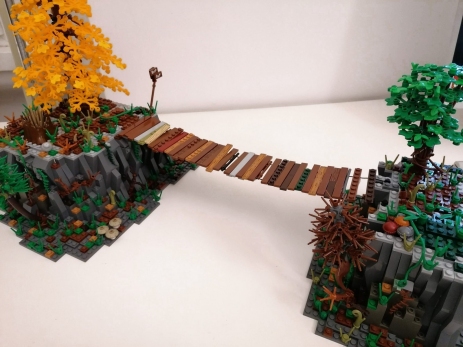 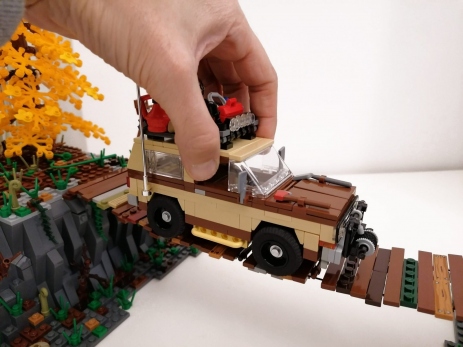 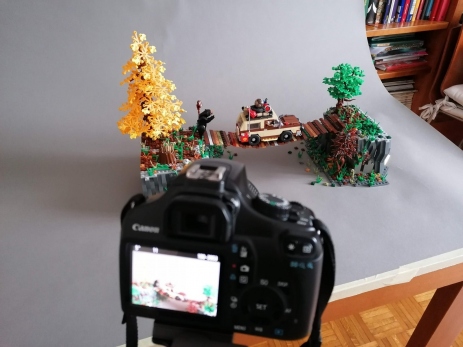