Floating Dystopia is a floating barge doomed to wander the oceans of Hyperuranium in search of the promised land.

It all started on February 22, 2222 when a tremendous nuclear war wiped out human civilization in less than a week.
The earth thrown off its axis, its crust rocked by massive movements, and the five continents were torn completely apart and sunk deep below the sea.

Only a small portion of sub-Saharan Africa was saved and the few remaining human beings were forced to leave their lands, devastated and burned, to seek a safe haven where they can live in peace and prosperity.
But this land is far away and in the meantime they are forced to live a dystopian life made of deprivation and scarcity.

Floating Dystopia consists of 4 modules and a floating base. Under the base you can find the reactors that make it move.The characters are: Kebra, Nagast and Hailé. Will they find their promised land? 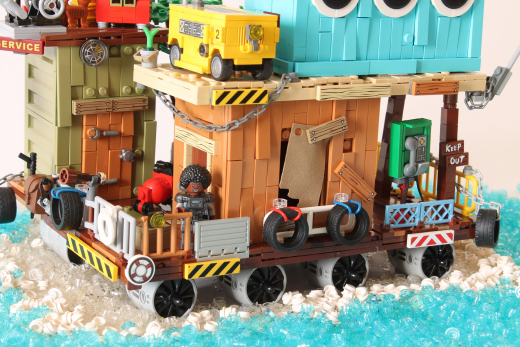 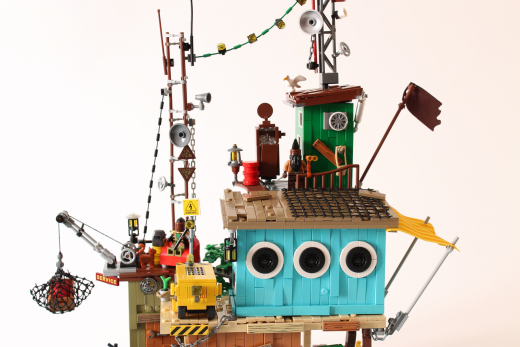 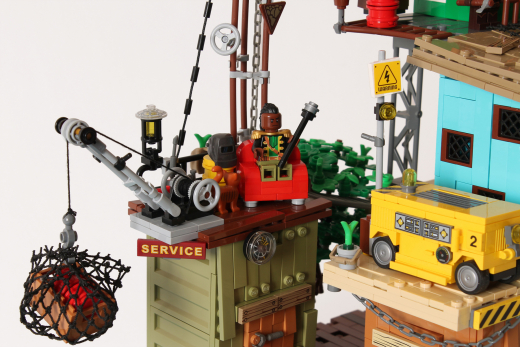 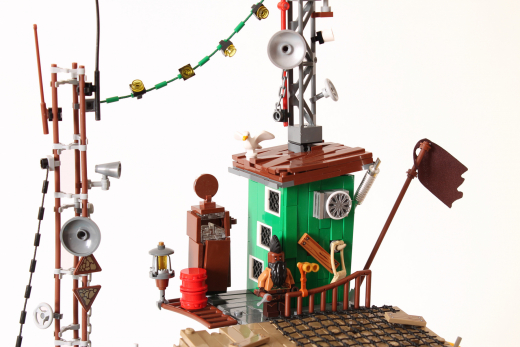 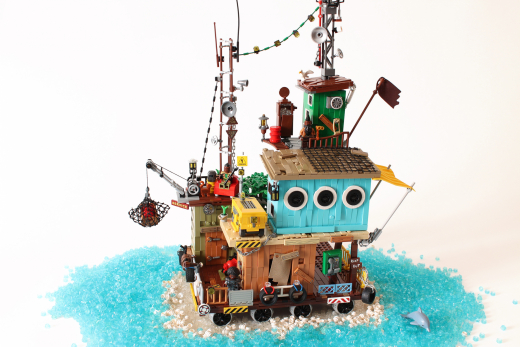 “In the distant dystopian future of LEGO builder Andrea Lattanzio’s imagination, a colony of survivors braves the seas and storms searching for land. Based on “Le Navigator” by Simon Laveuve (a miniature artist known for grungy, industrial dioramas), this ramshackle pile of outhouses and palettes is covered with clever techniques and textural details. Towering antennae and string lights add height as well as detail to the model while reactor-powered turbines under the barge move the colony, frothing the sea of loose studs below. The olive-green, dark nougat and medium azure plates detailing the structures add a “cobbled together” effect by intentionally misaligning them. The key to any post-apocalyptic build is knowing when and how to mismatch. Something like the railing of a floating platform would probably be pieced together from scrap. All of the mismatching parts give this effect while accessories hang along its perimeter for added detail. The shoulder pad adorned minifigure clearly understood the assignment but it’s the telephone booth for me. I mean, I barely see those around anymore so these guys must have dredged deep in those rising oceans. Perched atop the smallest structure, poised like a king and overseer of this tiny piece of dry, a majestic, orange cat scorns the minifigure that took his big red chair. The clever little crane lifting up a fresh batch of scrap is an awesome detail and an essential tool for any seafaring houseboat. Of course, a mobile generator is a must-have in any survival scenario as well and this one adds just the right amount of contrasting color to the palette. The bright yellow, and the green of the plants growing up in the back, contrast the muted tones of the denizens’ domiciles and grab your eyes. Three floors above the sea, this survivor surveys the skyline, watching for enemies or opportunities while nestled amongst the satellites and the seagulls. The red barrel is pretty fun but that lamp using Sauron’s crown inside a round plate is subtly awesome. Fresh off the confirmation of the A-Frame Ideas set, this builder doesn’t seem to be taking a break. The capable Andrea Lattanzio‘s tribute to the amazing Simon Laveuve translates his work well into brick form and it’s not the first, or the last time, someone has done something like this. Still, it’s always refreshing seeing artists pay homage to each other. You never know who you will inspire or what they might create so join these guys and go make something great!”